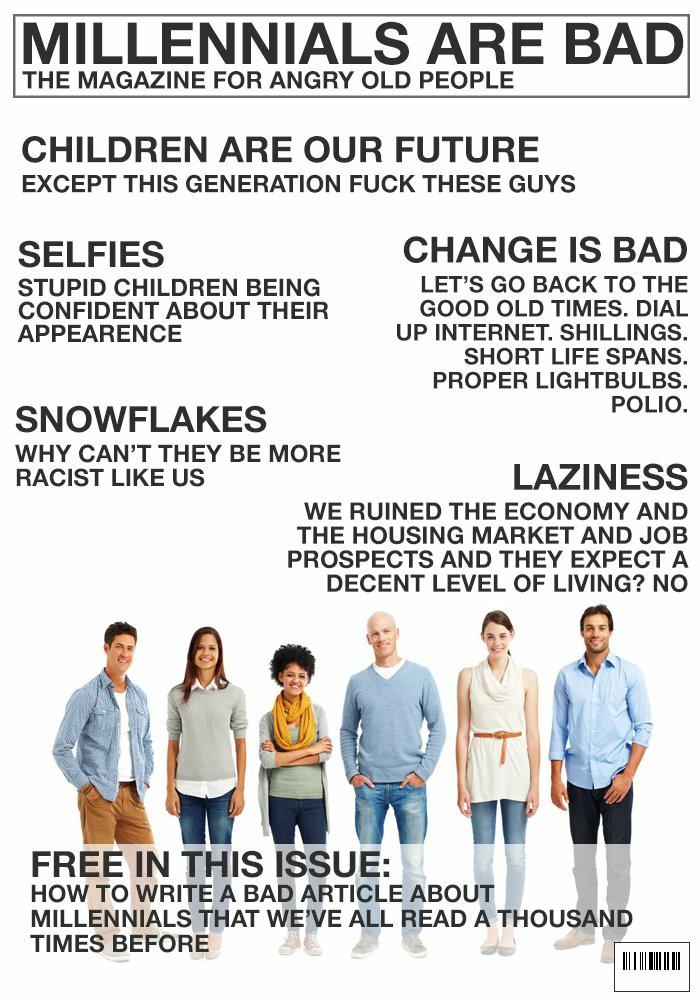 Millennials get a bad wrap.

It isn’t unusual for younger generations to receive flack for being the new and up-and-coming age group. There’s blame, victimization, anger, confusion, and a whole lot of “shaking one’s fist in the air and yelling ‘Get off my lawn’.” An argument could be made as to why: older people become more settled in their ways and hate change; the evolution of technology makes it difficult to keep up; there’s possibly envy and jealousy; or maybe it’s a combination of all the above.

When I was younger, I remember hearing my grandparents complain about music tastes, manners, and general laziness in “today’s youth.” Since I’ve gotten older (I’ll be turning the big 3-0 this year), I’ve noticed the taunting becoming more severe, and the graphic above epitomizes almost every single issue.

Today’s society has an unfortunate outlook – survival mode. It’s all about “my piece of pie” as if there isn’t enough for everyone to go around. Plus, there’s immense disregard for future generations simply because “one doesn’t live forever, so why should I care what happens 100 years from now.”

I don’t know if Millennials are truly a sensitive generation capable of seeing the racial disparity, an immigration issue, LGBTQIA discrimination, ageism, ableism, a flawed legal system, prison and military industrial complexes, an oligarchy regime, and now a fascist regime. Or that we thankfully live in a time where brilliant minds are capable of sharing their thoughts and research using today’s social media platforms.

Whatever the case, it’s true that Millennials and younger peoples do reject typical values seen in previous age groups: religion, marriage, having children, corporate cultures, etc. Seeing our parents struggle, having to adapt to vast changes in technology, and wanting better for ourselves and children, we developed new ways of being a member to society. Using the tools developed – Hell, developing the tools really – we’ve been able to change the world.

Change can be very scary, especially in a time when everyone feels attacked.

Amusingly, the above gif (I say Jif because that’s how you fucking say it) shows a Millennial crying out, displaying behavior typically attributed to my generation. However, a lot of the older generations are the one being “snowflakes”:

At the end of the day, Millennials are the next generation in line. Yes, there’s growing up to be done, but that’s in every generation. Why attack someone instead of mentor to help integrate them?

I cannot guarantee that we’ll continue being the most progressive as we age. There’s already things in people younger that I would rather strangle than nurture. But I also know how it feels to be discriminated against due to the year I was born. I will try my best not to do the same to them as it was done to me. 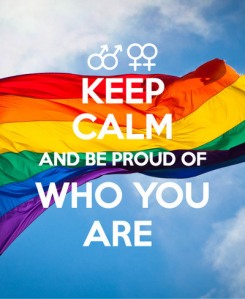 There is a certain enthusiasm in liberty, that makes human nature rise above itself, in acts of bravery and heroism.
– Alexander Hamilton

Disclaimer: I cannot tell you what is right nor what is wrong.  This blog post will go over what I believe we must do in order to protect ourselves and the future LGBTQIA generations. However, only you know what you can and cannot do. After all, you must first take care of yourself before you can assist others. So, please do not take this a personal assault or that you are weak simply because you cannot do what is being asked. You are strong. You are loved. You are enough.

I knew Jill had very little ability to win, but I was tired of voting for the lesser, especially since I did not consider Hillary to be a lesser evil. Simply the same evil we’ve had in the White House since Reagan.

Either way, I knew, no matter the head of the administration, it would be a fight.

With Hillary, it would’ve been trying to pull our government free from the grips of corporatocracy and/or oligarchy. We would’ve remained in war with countries we have no business being in war with and possibly starting more wars. Meanwhile, the degeneration of the Middle Class would’ve continued as well.

With Trump, it’s the situation we have now: fight every piece of legislation he’s pushing out as Executive Orders while fighting to protect the Media, refugees, Muslims, LGBTQIA, women, and so forth.

Many will argue that I made a poor choice, that Hillary, though flawed, would’ve been a better choice. I disagree. She would’ve continued the status quo while Democrats voted Blue and Republicans voted Red. We need to round up the masses, get them out of their seats, and force them to hold the government accountable.

Of course, this ideology can be threatening. In fact, it’s caused a backlash on the rights of LGBTQIA peoples, as well as many other minorities and special interest groups. Muslims have taken the hardest brunt of the administration’s power. However, I cannot comment on the atrocities of what’s happening with Muslims or women, but I can speak to what I believe the LGBTQIA peoples as a whole must do now.

I know many people, most friends, willing to leave the country in fear of their lives. I understand. I wish it didn’t come to this, but this was always a possibility with our government. Even in the hands of a Democratic administration. President Clinton, after all, instituted both DOMA (Defense of Marriage Act) and DADT (Don’t Ask, Don’t Tell). The arguments can be made these were poor choices made with inferior information, but it happened nonetheless. By people claiming to be our allies. So, there was a chance we may have needed to flee in previous administrations or future Democratic administrations.

However, it’s happening under Trump, and I can respect the anger and emotion felt across the country. Hell, I feel it. I can not vote for Hillary and still be pissed at the Trump Presidency.

I know many people want to go into hiding or run away. You either fight or fly. It’s an internal, biological human condition, right?

I’m asking, begging, pleading you try to talk yourself out of flying. After all, if it weren’t for “Friends of Dorothy” going against the idea of normalcy in society, if it wasn’t for the Transgender Females of Color who threw the first brick and fought police during Stonewall, if it wasn’t for the men and women going to the Supreme Court to fight for Equal Rights for LGBTQIA, we wouldn’t be where we are today. We wouldn’t have the rights and respect we have today or the clout to push for more.

It’s a scary thing to ask. I am a naturally rebellious person, so it’s built in my figurative DNA. But if more people can stand up, amass together, and stop the destruction of Equal Rights for all peoples, the stronger the possibility we can win.

For those who cannot leave or fight, please know I am here for you. I am fighting for you, for all of us. Stay strong. Surround yourself with loving people. Ignore the ignorant (I know, easier said than done). Take care of yourself. Hopefully, this ridiculousness will not last long.

Lastly, if you want to join the fight, look for local group gatherings. Donate to Progressive movements and candidates. Share information. I highly suggest leaving one’s house and going to at least one protest, especially when it will really count.

Why am I such a coward?

(Originally, I used the word “pussy” before I realized pussies are actually quite powerful pieces of anatomy. Also, the word is misogynistic. Personally, I don’t want to see “pussy” used as an insult any longer; it should be a term of one’s bravery and courage. How about we make a campaign to reclaim pussy? The same that was done with CUNT.)

What do the shadows of my mind have to hold against me? It’s like blackmail to keep me imprisoned.

What am I so scared of?

Is it the depression? Is it the jaded bitterness in me?

(I’ve sat at the computer staring at the monitor wondering what the fuck should I say for the past 20 minutes.)

It’s a fear of Death.

What if I spend my entire life going down one path and I regret it all?

I used to say I never held any regret because I didn’t want to be one of those people who lived a life of regret. But there’s a lot of regret. I fucked up a lot. I ignored advice and I wasted so much time.

The entire photo above tells me to ignore that fear, ignore the regret, and do the things I know that will make me happy.

It’s time to enjoy life and “[not] waste that shit.”